Hello there! My name is Canary Beck, and I’ve been a resident of Second Life since 2007. I’m a writer, a reader, a hunter of insight and a gatherer of interestingness. I enjoy nothing more than to dine at the plate of curiosity and sip from the cup of awesomeness.

But enough about me… with over 2000 Second Life blogs available, why should you bother reading mine?

I write a different kind of Second Life Blog

Nine out of every ten Second Life blogs are about fashion – and thank goodness, how would I have the faintest idea about how to get dressed in the morning if it wasn’t for their advice? 😉

This blog, however, isn’t one of those blogs. With my first post, I asked myself:

I like to write long-form editorial posts about the social science aspects of Second Life. I like to put on different lenses to see the world from different perspectives. In one post, I might wear a psychological lens to understand how we think about things emotionally and intellectually. In others, I might put on anthropological glasses to explore why we might behave the way we do.

Because I write experientially (using my experiences to inspire my ideas and question thoughts and emotions openly), many of the things I write will record my own development as a person in Second Life – intellectually and creatively.

So come on now, follow this blog and we’ll be BFFs.

Canary Beck (aka Becky) became a resident of Second Life in 2007, shortly after watching a CNN report about a new virtual world.

Highlights of Becky’s Second Life include the owning and running of the picturesque Italian waterfront region, Basilique, since 2012, where she hosts 3 weekly events and builds artistic performances. In 2013, Becky founded the Basilique Performing Arts Company which produces ground-breaking, large-scale, theatrical productions (e.g. Paradise Lost in Second Life as well as Romeo and Juliet). Paradise Lost had a 9-month sell-out run on the SL Marketplace, and received over 100 positive reviews by media across Second Life. Becky also enjoys singing, doing voice-over work and putting on photographic arts exhibitions under the Company’s umbrella. Since 2011, Becky has been blogging at www.canarybeck.com writing her unique, evidence-based posts about the social science aspects of Second Life. Using psychological and ethnographic approaches, she seeks to provide original and educational tools to help us better understand not only the virtual experience but also ourselves.

Her contributions and perspectives are frequently recognised by Second Life media, community groups and Linden Lab. Draxtor Despres featured her in the “DraxFiles World Makers Episode 18: Paradise Lost” and she has shared her views on marketing Second Life as a featured guest on the DraxFiles Radio Hour with Jo Yardley. She was awarded a 6-month Artist-in-Residence grant to host the Romeo + Juliet Experience by the Linden Endowment for the Arts (LEA). Her photographs have been selected as the Second Life Pic of the Day and her region, Basilique, was most recently chosen as the location for the Second Life Inworld Meetup in May 2015.

In real life, Becky has a background in behavioural and social psychology. Working as a marketer for many years, she owns and operates a busy London-based internet marketing consultancy where she specialises in primary market research, website design, conversion optimisation, and search marketing. Personal interests include history, anthropology, gender relations, communications, and gaming.

You want to know more?

If you’d like to hear my views on marketing Second Life, find a comfortable seat, grab a cuppa and click this:

The Basilique Performing Arts Company develops  large-scale, live, and immersive theatre in Second Life. Our most successful production was Paradise Lost in Second Life, which ran for 9 months, sold over 600 tickets at L$1000 each. The show was unique in how we costumed and animated the audience as a part of the production – who played angels and devils dancing in sync with the action of the play. Over 100 bloggers wrote posts about it and over 100 audience goers gave the show 5 star reviews.

As creative director, I manage our projects from start to finish. I write the treatments and plot the scenes, cast all the actors, design and build the sets, develop avatar characters, add visual effects, and tell the story-telling through character blocking and animation choreography, dynamic scene changes, musical pairing and voice overs.

I am now working with machinimist Forren Ashford to produce a video version of the 60 minute production, which we expect to release in the first quarter of 2015. This is the DraxFiles World Makers interview that shows some of the making behind the stage production and scenes from the Basilique region.

Before the stage show premiered, we produced four trailers which give you a hint of what the movie will look and sound like:

My first production was a 7-Number dance show called “Burlesque Spectacular“, which I produced and danced in, together with Purdie Silkamour. Harvey Crabsticks stage managed the show in February 2013 and ran for 4 performances. 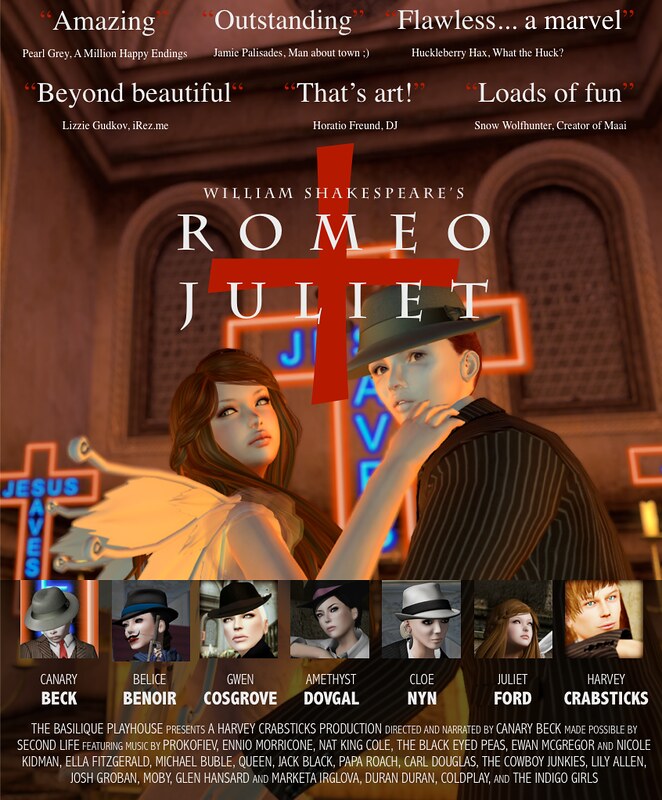 Later that spring of 2013, I directed and starred as Romeo in Romeo + Juliet in Second Life. I created the play with Harvey Crabsticks. I ran for nearly 10 months until we closed the curtain to make room for Paradise Lost. In 2014, we updated the show when the Linden Endowment for the Arts awarded me a 6 months Artist-in-Residency grant to perform the play at LEA14.

In April 2014, we launched Paradise Lost in Second Life. In the play, I played Eve, and numerous other characters. The show ran from April to October 2014. The play was attended by over 600 people at L$1000 per ticket, and remains a landmark production for the performing arts in virtual reality.

I sing folk, jazz, indie-pop, alternative and classical. Here is a sample of my singing at an Open Mic night I organised in 2013:

I offer voice-over work for my own projects and for other projects to which I’m invited to participate. Artists and machinimists have used my voice as features in their exhibits and videos. This is a sample of my voice work for Skin Walker Casting.

In late 2014, I exhibited a series of reflective photographs called “Ne me quitte pas”, with each of the portraits titled with verses taken from the famous 1959 song by Belgian chansonnier (singer-songwriter) Jacques Brel (and in some cases, the English adaptation “If You Go Away”). The exhibition of 20 pictures was held between November 20th, 2014 and January 10th, 2015 at the Arts & Culture Community at Wanderstill Ode, and is now in semi-permanent residency at Basilique Town.

The Basilique is a full region in Second Life inspired by the lakeside towns of Northern Italy. There you will find a small town that is home to a square, a wine bar, a cafe, a few art galleries, and tower. Further around the town you’ll find a Members Club that has a Chapel, Bathhouse and garden; a Basilica and Church that I’ve converted into theatres, a lounge bar and dance club, a long pier, fish market and dock. Further afield, you’ll find a lighthouse, a small recreation park and pond, and my house on a beach. Basilique has a website that includes information about the geography and history of the region, and many images taken by top Second Life photographers.

Here’s a lovely fan-produced video showing images of the Basilique:

At Basilique, I host three events:

I am a weekly guest columnist at New World Notes, Second Life’s most influential news and editorial blog. In my role as columnist, I write articles based on original research I undertake in Second Life. I also write posts on behaviour in virtual worlds and virtual world etiquette.

I am a team member and contributor to SL Blogger Support, Second Life’s largest blogger support network and website providing tutorials and other resources for bloggers in Second Life. In my role as contributor, I write tutorials and articles aimed at supporting the blogging community in areas such as SEO, WordPress functionality, blogging etiquette, and blog marketing.

I am co-owner of Blogging Second Life, the largest directory of Second Life blogs and stores online. The website offers listing of SL blogs, stores, and links of assistance to bloggers in Second Life. In my role as administrator, I am responsible for managing the website’s front and back end databases.

If you’re interested in keeping up to date with me and my stuff, these bits and bobs will help:

The best way to contact me is by email, or you can use this form if you’d prefer.

If you’d prefer to just email: canarybeck@gmail.com or reach me inworld [Canary Beck]

This site uses Akismet to reduce spam. Learn how your comment data is processed.